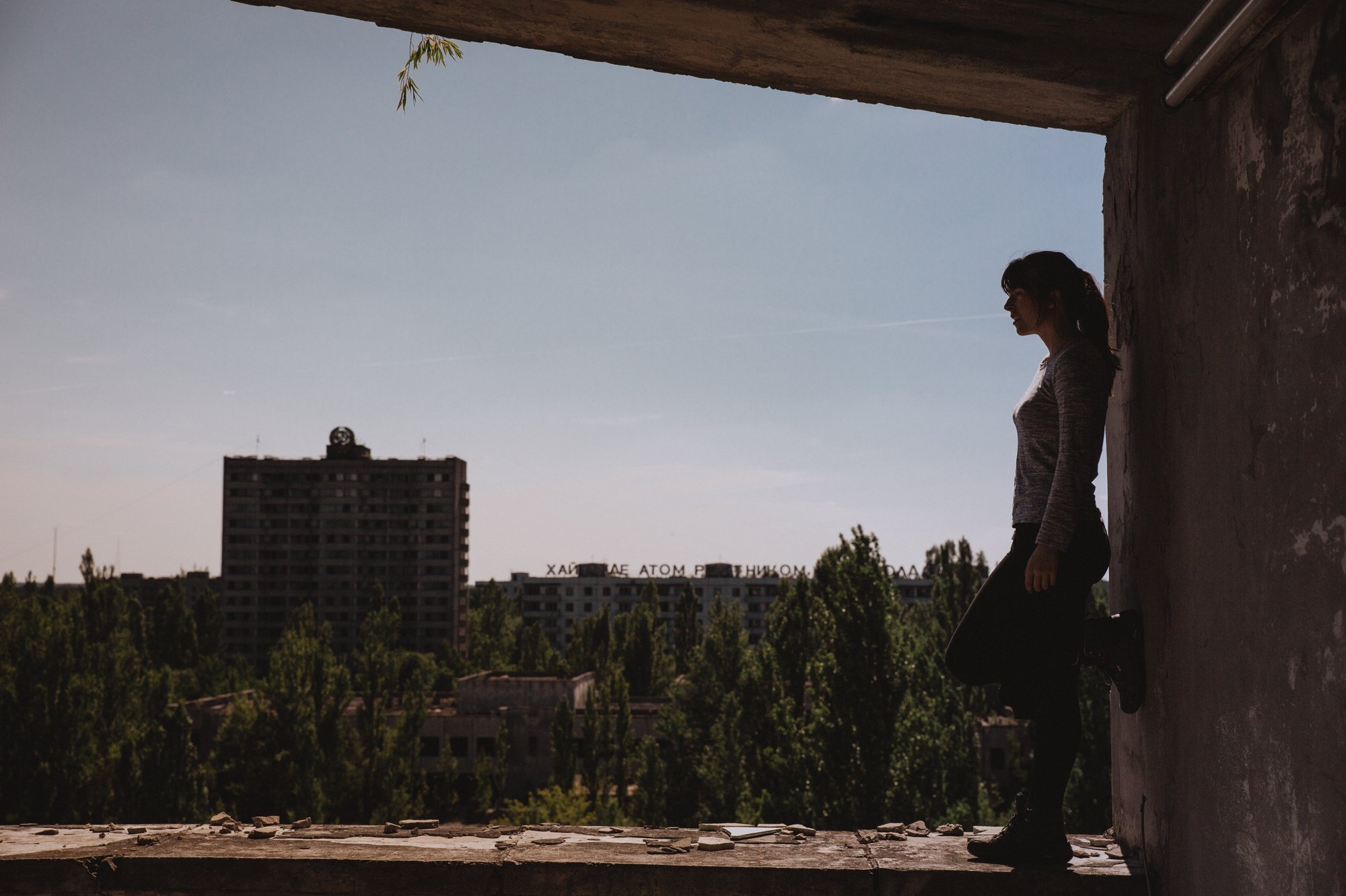 My Visit to Chernobyl

May 2019: In wake of the HBO series Chernobyl, I am looking back and reliving some of these memories from my trip to Ukraine in 2015. I visited to see an abandoned Ferris Wheel where at the same place others horrifically lost their lives. Victims failed by a government whose first response was to deny that there was even a problem. People stayed in the city for THREE days as the sky rained chemical ash and smoke billowed overhead. Seven weddings took place, children played outside, people carried on with usual weekend life until the evacuation was called. Radiation is perhaps one of the very worst ways to die, burning victims from the inside out. Being exposed to any amount can be dangerous, hence, why we wear heavy bibs when getting x-rays and technicians step out of the room. Bottom line,  I feel remorse about my reasons for visiting. I feel greedy and selfish for my reasons for visiting and wish I could’ve paid more respect for this community. Perhaps true understanding is, like so many others, part of things that come with time. At any rate, I am still hoping to bring some light to those who come across this post. To better honor these forsaken people.
first things first.
Why abandoned places? As a kid, I stumbled upon an abandoned house in the backwoods of Indiana on my families property. The house was just left quietly alone in the forest; no sign, no note, no explanation. I wanted to know the people who lived there, what dinner smelled like after a long day, the things they laughed about, why they left it behind. I also admired how nature had claimed it as her own.
That fascination has stayed with me and grown as I’ve been able to travel the world. I’ve seen a concrete castle facade outside of Beijing, a plane crash on the coast of Iceland, a Human Zoo Exhibition outside of Paris and, more recently, a left-behind hotel in northern Bali.
I first hear about Chernobyl while visiting, of all places, a small museum in West Texas. The exhibit featured a team of scientists from Texas Tech [my alma mater] researching the biological consequence of chronic exposure to radiation in the environment. This was at the 25th anniversary of the accident in Ukraine. I recall looking through the photos and being saddened and shocked that I had never heard about this disaster before.
It wouldn’t be until three years later, standing in front of reactor number four that I would really feel the weight of this catastrophe.
My journey to Ukraine was lead by my fascination for abandoned places, particularly theme parks. I was most curious to see an aging yellow Ferris Wheel and a weathered, incomplete set of bumper cars. In some research for one of my summers abroad, I learned that companies did multi-day tours from Kiev.
Instead of gathering with friends and barbecuing or watching fireworks in the sky, I opted to spend this particular Fourth of July weekend stepping into the Exclusion Zone of the Chernobyl disaster.
I spent the weekend bunking in an old pensione, featured in the documentary Chernobyl’s Cafe, dining on Ukrainian fare and swapping stories with equally curious travelers about life in Eastern Europe. I drank pure Russian vodka like water out of antique teacups, met plenty of local dogs and got to explore many corners of this near abandoned spot that once was buried under the Iron Curtain.
Our tour guide, Alexis, was head of the police during the time of the reactor accident and shared personal stories about his experience working and living in Pripyat, along with photos and detailed accounts of life in the city. There was one point where he spoke about his favorite cafe to get a coffee on the main road going into town just as our van pulled up to the same cafe, allowing us to set foot in the same cafe from his story, now in ruin from thirty years of neglect and Ukrainian cycles of seasons.
I particularly enjoyed an afternoon where we ventured out of the exclusion zone to the home of a chicken farmer and his wife who lived through the accident, never leaving the area. We listened to him talk about his decision to stay and adhere to normal farm life despite the risks of radiation poisoning.  Alarming and saddening was the visible radiation seen on his foot as his chickens roamed freely around. Another farmer down the street shared a cup of water with me from his well and showed off several responder and rescue trucks in his lawn from the late eighties.
My takeaway from visiting Chernobyl is, firstly, a feeling of remorse for the victims of a cruel government and gratefulness that I was able to explore an entirely abandoned city. It is truly lukewarm and even in my revisit to these thoughts, I don’t feel particularly proud.
Los Angeles Based Wedding Photographer teri b on the ig
My last wedding of 2021 was with some of my favori

Long ago, I fell in love with the ability to captu

A little collection of moments in the woods with t

Been busy this week rolling out some big updates o